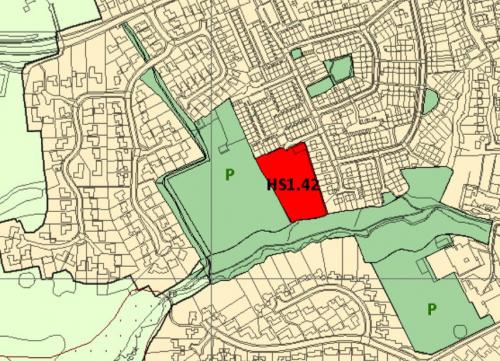 Information has been sent to the Parish Council about the plans for the land at Greenside, allocated for housing

“The upcoming sequence of events for development on this site over the coming months, these are indicatively as follows:

We expect to have disposed of this site to a Third Party by October 2018, after which point it will be their responsibility to prepare and submit a planning application and coordinate with Chorley Council to ensure policy compliant proposals. “

Euxton Parish Council was very disappointed when this land was allocated for housing in the 2012/2026 Local Plan. This plot was not in at the start of the plan process but added at a much later stage which meant earlier resident consultations did not have it included. This land at Greenside was part of the parish council’s recreation facility and used as open space and a mini-soccer pitch.

Euxton Parish Council fought the allocations in Chorley’s local plan long and hard and, the processes and work it put in were well documented in the press, on the website, at most meetings and in the newsletters from 2010 to 2013. Two public consultations took place in the village in 2010 and 2012, and a public meeting in 2012.

Euxton Parish Council representatives appeared in front of the Planning Inspector to argue the case against additional housing in Euxton a number of times, in person and on paper when required.

The land was sold by Chorley Council in late 2017 to Homes England and the Parish Council no longer has a lease on the land because of the sale.