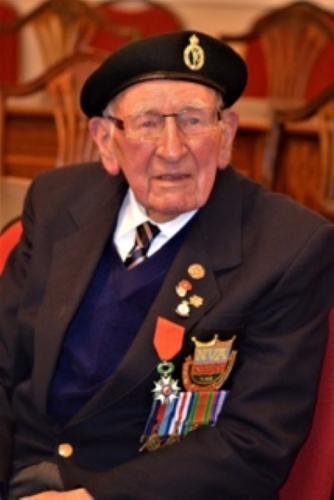 Who would have known that in Euxton we have a hero in our midst?

George Clarke now 96 has recently been honoured by the French people. French dignitaries presented the Second World War veteran with the country's highest honour, the Legion d'Honneur. The medal was presented by the Honorary French Consul Philip Daniel.

The Legion d'Honneur, or the Ordre national de la Le-gion d'honneur is Frances highest award. It is equivalent in the UK to the Victoria Cross the highest honour in the British system. The award was in recognition of Georges part in the liberation of France in 1944.

George now 96 first tried to join up at the age of 18, but because he was working for a company doing joinery work in connection with air raid shelters he was turned down.

He moved jobs to the production of the Lancaster Bomber in Trafford Park Manchester, and also became a member of the Home Guard. Then it happened he was called up initially to the RAF, but ended in the Army and following his training became a wireless operator.

He arrived in Normandy a few days after D-Day on Sword Beach. George travelled throughout France and Belgium setting up wireless posts and repairing any problems that arose.

When the war ended his wireless skills were no longer needed, so instead he worked as a driver delivering military mail to local units and airfields all over Germany. George was demobbed in 1947 and returned to England.

On his return George worked for his father's haulage firm, he later left the firm and became a plumbing manager, which he says "was the best job he ever had". George was married to his wife Eva for 65 years, and has lived in Euxton since the 1980's.

Written by Cllr Eric Jones, on behalf of Mr Clarke

August 2017: It is with great sadness that the Chair and Councillors announce the passing of George Clarke, one of the first two people awarded Freeman of Euxton.