Another Star is Recognised 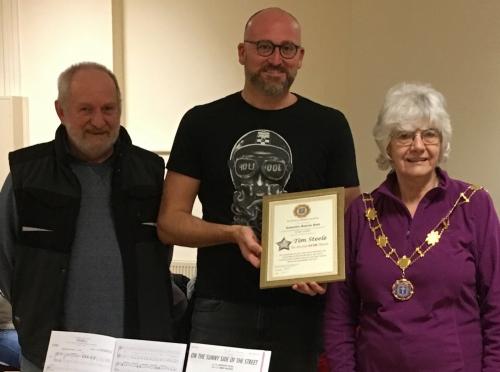 Another Star is Recognised

Tim, a lifelong resident of Euxton, became leader/musical director of Euxton Singers ladies choir in 1998 following the untimely death of the founder, Denis Broughton, and the retirement of the co-founder, Lois Caesar.

Under his guidance (and imagination) the choir has gone from strength to strength - he soon introduced a 'production value' for the charity fund raising concerts held annually, usually over four nights in Nov/Dec in the Community Centre.

Over the years, tens of thousands of pounds have been raised by the singers for local charities, and charities slightly further afield from which local residents can benefit.

The latest (2018) concert - featuring songs from Aladdin - achieved a fabulous donation of £3400.00 to St Catherine's Hospice. (St Catherines also received a donation in 2011 - a show which featured songs from The Rocky Horror Show!

Other Charities to benefit (and featured songs) have included:-

With approximately 40 members, new ladies are always welcome to join - the choir is open to all ages and abilities - no previous experience or auditions required - and for a small weekly sum (currently £2), it provides a fun and friendly 'get together' with like minded ladies, with the opportunity to make new friends, and socially interact within the community.

In recent years, Tim's increased responsibilites in his working life at the University of Central Lancashire has meant that he's had to travel overseas several times a year, but such is his commitment to this community organisation, undeterred, he arranges for his trusty 'back up team' to oversee rehearsals in his absence - THE SHOW MUST GO ON!!

The annual concerts have become a much anticipated event in Euxton and tickets for all nights soon sell out, and this, together with the sale of raffle ticktets and donations for the (free) refreshments, helps boost the amounts given to the charities.

In light of Tim's selfless contribution to the community of Euxton I feel he is a well deserving recipient of an Euxton Star Award.