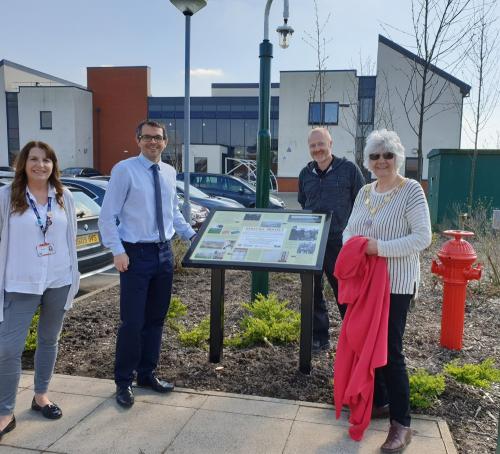 Local councillors, volunteers, historians and partners met to celebrate the 80th anniversary of King George VIs visit to ROF Chorley and to unveil some historic artefacts and information board in Buckshaw Village.

County Councillor Aidy Riggott (Euxton, Buckshaw & Astley) explained a little more about this Euxton Parish Council project and the work that has been undertaken, saying “When I became aware of the existence of an old street light from the ROF site in an area being developed for housing, I quickly secured agreement for Euxton Parish Council to take ownership of the street light from the landowners Persimmon Homes. I approached the Parish Council with an idea to restore this light and to locate it somewhere appropriate in Buckshaw Village.”

The scheme initially made slow progress whilst locations were considered and permissions and likely contractors were assessed. Following a conversation between County Councillor Aidy Riggott, RMG (the main managing agents in Buckshaw Village) and local historian Stuart Clewlow, the idea quickly evolved to include an interpretation board and to locate the restored streetlight outside the Community Centre. Local contractor J. Sharples came on board and oversaw the restoration of the streetlight while Stuart Clewlow pulled together pictures and information for the interpretation board from his vast archive of historical items and knowledge, which Debra Platt designed and arranged to create the interpretation board now on display for residents.

Stuart was then able to procure a fire hydrant from Runshaw College, who were keen to support the project, and the team were then able to install this alongside the streetlight, just as it would have been back when the ROF factory was in operation.

Stuart added “It has been a privilege to work with Euxton Parish Council and local Contractors to deliver this heritage project. It is important we remember the existence of ROF Chorley and it is rewarding to have played a part in restoring a little piece of history to the front of Buckshaw Village Community Centre. People of all ages will be able to see two artefacts from the 1938 construction of ROF Chorley and the interpretation board will provide more historical information and ensure that the story of the site is remembered and shared for the next generation.”

Cllr Katrina Reed, Chairman of Euxton Parish Council commented "Euxton Council is proud of this project which, from small beginnings has became a much larger scheme. Thanks must go to all who worked on the project from Cllr Riggott's initial proposal in 2015 to the immense amount of assistance from Stuart Clewlow in gathering the information and items together for the project. This was truly a joint project between all the organisations involved and was delivered in time for the 80th anniversary of the visit to the new site by King George VI. A further project is being considered for Euxton Buckshaw which you may see soon."

Photos x 3
1 - Group as below at unveiling on 80th Anniversary of King George VIs visit.
2 - Streetlight when discovered by County Councillor Aidy Riggott
3 - J. Sharples removing the light before its restoration under supervision of Stuart Clewlow